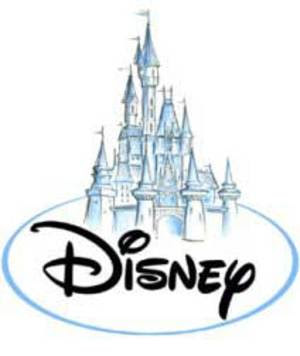 A lot of people have been requesting that I post the article I wrote about Disney. So, here it is, in all of it's glory...

When children or adults think of the great classical fairy tales today, be it a European tale such as Snow White, The Little Mermaid or Cinderella, or a Middle Eastern tale like Aladdin, they will think of Walt Disney. Disney’s representations of classic fairy tale texts are so powerful that children tend to believe that Disney's version of the tale is the “real story” rather than the classic version . Children have formed mental images of the princesses and other characters depicted in fairy tales not only from their representation in the “original” written text but more commonly from Disney’s versions of these tales . Disney fairy tales, therefore, have an important role to play in shaping the self-image and belief system of children . It is significant then to note that racial stereotyping is a major issue that surfaces in many recent Disney fairy tales. Racism and negative stereotyping is most apparent in Disney’s animated fairy tale Aladdin (1992). Negative racial stereotyping is evident in Aladdin’s song lyrics, as well as the exaggerated, stereotypical features of the “bad” characters and the Anglicisation of the heroes of the film – Princess Jasmine and Aladdin. 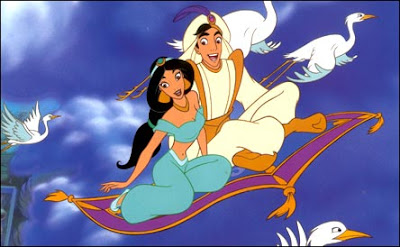 A long history of racism associated with Disney’s work can be traced back to offensive representations of people of colour in films such as The Song of the South (1946), and The Jungle Book (1967), as well as controversial representations of Native American people in Peter Pan (1953) . However, the most contentious example of racial stereotyping in Disney films occurred with Disney’s release of Aladdin in 1992. This example is particularly significant as the film was a high-profile release and was not only one of the most successful adaptations of a classic fairy tale but one of the most successful Disney films ever released .

Disney’s Aladdin (1992) is based on a tale from the Arabian Nights’ Entertainments, a collection of tales thought to have been brought to the Western world in the eighteenth century by Antoine Galland who translated the tales from Arabic into French . While most tales in Arabian Nights can be found in Arabic manuscripts dating back to the fourteenth century, scholars debate that Aladdin is truly an Arabic tale. “The story of Aladdin first appeared in Arabic in the late eighteenth century, after it had appeared in what claimed to be a French translation by Antoine Galland…Galland claimed to have been told the tale by an Arabian …” . Regardless of the tale’s true origin, Arab people recognise the tale as their own and trace its origins back to the medieval period.

The literary version of Aladdin chronicles the adventures of Ala’a El-Deen (a poor, kind man forced by his poverty to steal for a living). Ala’a El-Deen’s adventures include an encounter with the Sultan’s daughter - Princess Badroulbadour - and subsequent romance, his discovery of a magical lamp and his eventual rise to the position of sultan . Disney adapted this classic Arabian fairy tale into an animated feature. Playing live to an audience of millions of children worldwide Aladdin is one “of the most controversial examples of racist stereotyping” in Disney history .
The lyrics of the Film’s opening song outraged and offended members of the Arab community. Arabian nights (The film’s opening song) sets a decidedly racist tone for the rest of the film by characterising Arab countries as brutal and violent:

Oh I come from a land,
From a faraway place,
Where the caravan camels roam
Where they cut off your ear
If they don’t like your face
It’s barbaric, but hey, it’s home .

In this characterisation, a politics of identity and place associated with Arab culture magnifies popular stereotypes already perpetuated by the media. By characterising an entire region as “barbaric” Disney cultivates an incredibly negative stereotype of Middle Eastern people that children for generations will absorb and retain . While a public outcry led Disney to eventually alter the line: “Where they cut off your ear/ If they don’t like your face” for the video release of the film, Arab groups were disappointed that the line: “It’s barbaric, but hey, it’s home” was not altered and remained in both the video and CD release of the film soundtrack . The racism indicated in the opening lines of the film is further reproduced in a host of supporting characters who are portrayed as “grotesque, violent, and cruel” .

Yousef Salem, a spokesperson for The South Bay Islamic Association, characterised the supporting characters as “bad guys” with “beards and large, bulbous noses, sinister eyes and heavy accents, and they’re wielding swords constantly” . The narrator from the prologue (who also sings ‘Arabian Nights’) is a “very sleazy, burlesque character” portrayed as a “shifty, disreputable Arab” . The merchants remain dark skinned, and vicious as seen in a scene when a merchant attempts to cut off one of Princess Jasmine’s hands because she took an apple from his stand to give to a hungry child . While this form of punishment for stealing may be historically accurate under Sharia – or Islamic law – it is interesting to contemplate why Disney felt the need to highlight this one example of Muslim jurisprudence to young viewers in Western nations . It is evident that Disney is utilising what some Islamic scholars say is a misunderstanding of Sharia to portray Arabian societies as unjust and unfair .

Although all of the characters in Aladdin share Arab descent, it is only the “wrongdoers” that possess exaggerated, stereotypical features . Jafar, the Sultan’s advisor and primary antagonist of the film, is described narratively as “a dark man…with a dark purpose” . Jafar, as are all of the supporting characters, is darker skinned than Aladdin, and Jasmine, with a prominent, hooked nose and black facial hair . Most of the supporting characters, including Jafar, wear large turbans or other head pieces and speak with quite heavily accented speech . The use of accented speech and different physical appearance serves to distinguish the “bad” characters from the “good” . Racism in Disney’s Aladdin is evidenced in the negative visual representation of Arab people as well as racially coded language and accents . In contrast, the heroes of the movie, though supposedly representing Arab characters have been heavily Anglicised.

In the classic Arabian Nights tale, Aladdin’s love interest was known as Princess Badroulbadour however, in another act of Anglicisation, Disney renamed the princess Jasmine for the animated version of the tale . As well as this Anglicisation of the princess’ name, Jasmine’s physiognomy was altered to look “quintessentially European” . Jasmine retains many white features, such as a delicate nose and petite mouth . Her skin tone, while appropriately darker for the Middle Eastern setting of the story, is still lighter than that of the secondary characters . Perhaps the most distinguished physical feature of Jasmine is the overly large almond-shaped eyes; apart from her skin tone this feature appears to be the only signifier of racial difference . Physically, Jasmine could easily be an "exotic" version of a Barbie doll - with her cinched waist, voluptuous bosom, long hair, and perfect features . Jasmine’s style of dress was another aspect of her physical appearance that angered Arab people. 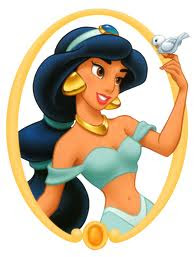 The Harem-esque appearance of Jasmine’s “off-the-shoulder, cut-at-the-midriff blouse” angered many, who believed that:
“The clothing styles were changed to suit an American notion of fashion befitting a mysterious Arab culture. Instead of the veils and long dresses worn by Arab women to symbolize their dignity, beauty and self-respect, Jasmine, the Sultan’s daughter in Disney, wears bikini tops and silk pants cut low to bare her navel” .
By revealing what Arabian women covered most, Disney ignored the prohibition of exposure in Arab cultures and therefore not only perpetuated a negative stereotype of Arab women but an incorrect one. Disney’s depiction of Aladdin, the Arab hero for who the tale is named, also received criticism.

As with Princess Jasmine, Aladdin possesses few features that would traditionally be associated with Arab people . Aside from his black hair, there is little to indicate Aladdin’s Arab identity, he is light skinned with a small nose, hairless face and large almond shaped eyes resembling Jasmine’s. A hint of the racism that informed the choice of the Disney Imagineers to depict Aladdin in such a way is provided by Peter Schneider, President of Feature animation at Disney. Schneider indicates that Aladdin’s physical appearance was modelled after All-American movie-star Tom Cruise and not after an individual of Arab descent . It is evident that Disney endeavoured to anglicise the hero of the film as well as the princess. Islamic Spokesman Yousef Salem described Aladdin in the following way:
Aladdin doesn’t have a big nose; he has a small nose. He doesn’t have a beard or a turban. He doesn’t have an accent. What makes him nice is that they’ve given him this American character…I have a daughter who says she’s ashamed to call herself an Arab, and it’s because of things like this”. 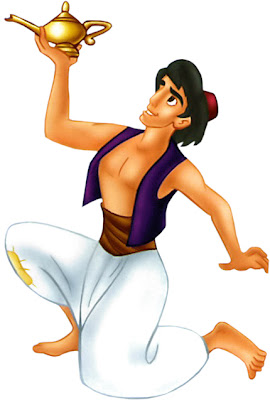 While Aladdin begins the film with a name similar to the one he is christened with in the classic Aladdin text, he is eventually renamed ‘Al’ by the most important characters in the film . In the original Aladdin text, “Aladdin” is known as Ala’a El-Deen, however, his name was changed by translators who believed the name Aladdin was more “agreeable to eye and ear, and more consonant with the spirit of our language” . In an act that echoes the methodology of the original translator of Aladdin, Disney attempts to further Anglicise Aladdin by renaming him yet again.
Aladdin’s genie calls Aladdin ‘Al’ for the majority of the film and in one telling scene Aladdin asks Jasmine to call him Al, an act that strips away any identification Aladdin has with his traditionally Arab roots . As well as this, the act of renaming Aladdin “superimposes a Euro-American cultural practice that renders the character ridiculous as an Arab” . In contrast to all of the villains in the film, Aladdin, as well as Jasmine, speaks Americanised English with no trace of a Middle Eastern accent. Arab scholars have been critical of Disney’s use of different accents suggesting this difference “Arabizes” the transgressive characters while Anglicising the wholesome characters “thereby heightening negative stereotypes linked to Middle Eastern people while concurrently reinforcing positive associations with whiteness” .

The Disney Imagineers have the choice to break negative stereotypes such as those seen in Aladdin and present different races in a more positive way. That they do not exercise this choice is evidence that they either “support the stereotypes or that they are not aware of them - which one might say amounts to tacit support” . Given the cultural influence and political power that Disney exercises over numerous levels of children’s culture, the conservative and evidently racist ideologies they produce and circulate should not be overlooked or dismissed .

Giroux. Henry A. Breaking into the Movies: Film and the Culture of Politics. Oxford: Blackwell Publishers Inc, 2002.

Lacroix, Celeste. “Images of Animated Others: The Orientalization of Disney’s Cartoon Heroines from The Little Mermaid to The Hunchback of Notre Dame”. Popular Communication 2, no. 4 (2004): 213-229.